Charlie and the Chocolate Factory (2005)

Step inside the magical world of Willy Wonka's famous chocolate factory. Based on the Warner Bros. Pictures feature film directed by Tim Burton and the classic Roald Dahl book, this new videogame allows players to explore deep inside the factory and play the beloved story as Charlie Bucket. Find a Golden Ticket and, along with four other children, win a personal tour of Willy Wonka's factory guided by the notorious and reclusive candy-maker himself. Embark on a fantastic adventure exploring the many extraordinary environments of the factory, including some from the book that do not appear in the film. Discover what happens after the other children, greed-driven and unrestrained, wreak havoc throughout the factory. Then save the chocolate factory from their destruction by solving mystifying puzzles and using inventive candy powers. By helping the Oompa-Loompas and restoring order to the factory, Charlie can earn the respect of Willy Wonka and win an unexpected prize! 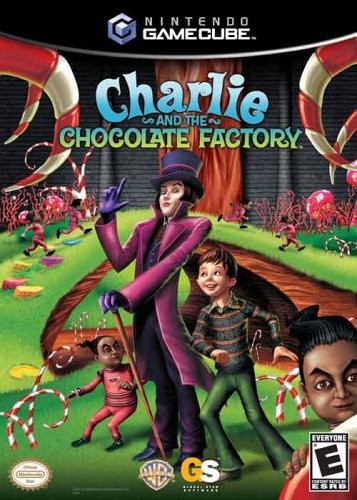