No More Heroes 2: Desperate Struggle takes place three years after the original game No More Heroes and its tournament. Players take control of the “Otaku Protagonist,” Travis Touchdown in another violent journey to the top of another ranked tournament. Once again, he’s hounded by Sylvia, “the hottest woman alive”, to take up the challenge in the new battle. Travis is not longer going into the tournament just to win sex with Sylvia, as they say, “this time it’s personal".

The game fixes some issues from its predecessor, such as the job system, now retooled as retro NES-style mini-games. Like the original title, it features wrestling moves and finishers, known as “Death Blows,” as well as the same blood-strewn, over-the-top violence. Darkside Mode operating with a kind of in-game slot machine returns as well. There are five “Darkside Modes” which give Travis a variety of bonus powers for a short time. Enemies may be slowed down, Travis is able to shoot fireballs, and he can even be turned into a tiger or explode like a human bomb to take out up to a room full of enemies.

Travis' motel room, or his home, once again features a variety of distractions such as his television, closet, and wrestling magazines. On top of this, his cat is now fat and requires occasional exercise and a proper diet. No More Heroes 2: Desperate Struggle also includes more playable characters, including fan-favorite Shinobu. 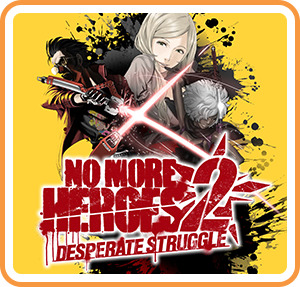