The Mushroom Kingdom is stricken with a horrible disease known as 'The Blorbs'! Princess Toadstool calls a meeting to discuss what action must be taken to save her citizens, and of course, Mario and Luigi attend. Bowser crashes the meeting, but is soundly defeated once again. After he's evicted from the castle, he meets a shady character who offers him a mysterious mushroom that he promises will beat Mario once and for all. Wolfing it down, Bowser suddenly starts sucking in everything in sight - including all of the Mushroom Kingdom's citizens, and the famous brothers themselves! What troubles will strike the kingdom next?

Mario & Luigi: Bowser's Inside Story is the third game in the Mario & Luigi series of games. Players control Mario and Luigi simultaneously in the side-scrolling platform environment of Bowser's body, while also controlling the Koopa King himself in the top-down world of the Mushroom Kingdom. Similar to games like Earthbound, enemy encounters are seen as actual enemies that players can avoid or attempt to strike early. The actual battles are a combination of turn-based menu attacks, and timed reactions to enemies during battle. By watching the way an enemy reacts, you can anticipate their attack and avoid it or counterattack.

As with most RPGs, players earn experience to level up their stats and become stronger in certain attributes, such as HP, strength, defense, speed and...'staches or horns (both of which translate into luck for the different characters). At each level up, players can select a specific stat to apply bonus points to - but if you keep applying bonus points to the same stat, you'll be less likely to get high bonus points the more you apply it. 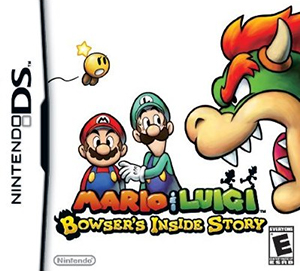