Part of Rare Replay. The player takes the part of the "meanest and fastest Gun Totin'Bunch of Rootin' Tootin' Gun Slingers which ever did hit the Wild West", Sheriff Quickdraw. In the beginning of the game in a first person view the player has to be quick on the draw to shoot bags of money that fall down the screen, to collect a "bounty" that will be used to buy supplies and cover possible fines during the game.

The main game then takes place in an isometric scrolling play-field that is similar to previous Ultimate Filmation titles. The objective is to collect a bounty by finding and eliminating wanted criminals that are harassing the town. Innocent bystanders will point to the direction of the criminal, shooting them will result in a fine reducing your score. A horse can be obtained to speed up the chase. Once the wanted criminal is encountered, the game again switches to a first person cross hair view, where the first to draw will be the winner. Taking out the criminal will give you a reward that helps you with future expenditures as the cost of ammo and horses changes as the game goes along. Your final tally will become your score at the game's end. 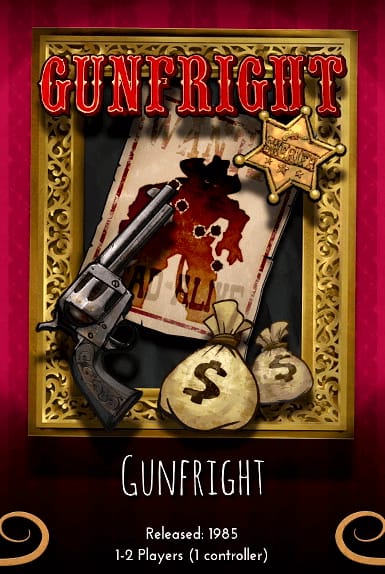 This game also exists on:
MSX Zx Spectrum Xbox One