Seven years after defeating Carlos Calaca, Juan Aguacate is forced to don his luchador mask again to face a new threat -- this time to the very fabric of space and time. Punch your way through a whole new action exploration-style world and try to save the Mexiverse!

Juan has settled down and is enjoying a non-heroic family life when his friend and mentor Uay Chivo reappears with terrible news: Mexico is in peril once again! To protect his home and family, Juan will have to squeeze back into his wrestling tights, venture to dangerous new lands, and deal with a host of powerful new threats.

Brawling has never been more beautiful! The long-awaited sequel to the smash hit action-platformer is here: Guacamelee! 2 brings luchador Juan Aguacate out of retirement for a stunning new Metroidvania-style adventure. Explore a huge, hand-crafted world inspired by Mexican culture and folklore, filled with sassy new villains and weirdos (and a few old friends!). Learn a deep repertoire of bone-crunching wrestling moves to fend off the skeletal hordes and overcome skillful platforming challenges... and who said anything about a Chicken Illuminati? Certainly not us! 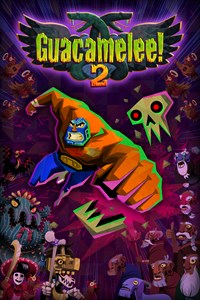