Ace Attorney Investigations: Miles Edgeworth, known in Japan as Gyakuten Kenji , is an adventure video game for the Nintendo DS handheld game console by Capcom. It is the fifth game in the Ace Attorney series, and an interquel set between Phoenix Wright: Ace Attorney Trials and Tribulations and Apollo Justice: Ace Attorney. The game was released in Japan on May 28, 2009, February 16, 2010 in the United States, February 18, 2010 in Australia and in Europe February 19, 2010.

Similar to previous Ace Attorney games, there are five cases in the game, and to unlock a new case, the previous case needs to be solved. Chronologically, the game appears to take place after Trials and Tribulations and before Apollo Justice. The five cases are presented out of chronological order in the game, though each describe a series of common events connected to an international smuggling ring and the Great Thief Yatagarasu that seeks to expose the smuggling ring by "stealing the truth" and revealing the evidence to the public. 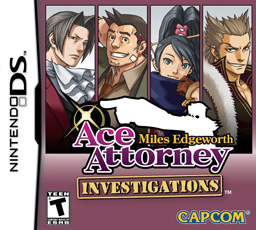