The World Ends with You

The World Ends With You is an action RPG that puts players in the role of Neku Sakuraba, a sullen loner of a teenager who wakes up to find himself in modern day Shibuya, Japan, with no memory of how he got there and a ticking clock in his hand that tells him to complete the mission - or face erasure.

Neku and his partner Shiki Misaki find themselves as "Players" in a game that lasts seven days. Each day, players are given various missions to perform for the "Reapers" within a certain time limit, or be erased from existence.

Players use collectible pins to amplify their combat powers against "The Noise", animal-like creatures which can corrupt the people and environment around them. Each pin is activated in a different manner, from tapping the touchscreen, making sweeping motions with the stylus, or even blowing into the DS microphone. Neku fights on the lower screen of the DS, while his partner fights on the upper screen. Their combat styles are different, but can be combined to form more powerful attacks. 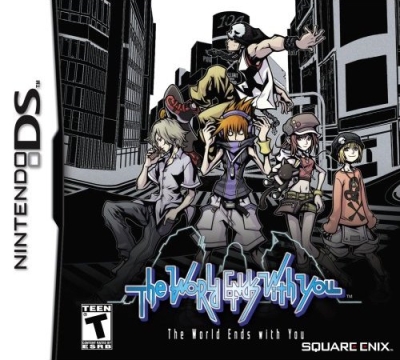