In TimeSplitters Future Perfect, victory is in the hands of the player's past, present, and future self in a battle that stretches throughout time where humanity is on the brink of destruction from the malevolent TimeSplitters. Cortez--the tough-as-nails hero from previous installments--finds himself in a frantic race against time in a desperate bid to trace the origin of the TimeSplitters and save mankind. This third installment of the best-selling franchise will feature hundreds of hours of gameplay and an improved Story mode that ties all the missions together, immersing gamers in an epic adventure between the years of 1914 and 2401. Innovative "meet yourself" time travel gameplay lets players be their own ally by teaming up with past and future versions of themselves. The game also will allow two players to fight through the Story in Co-op mode, and features extensive Challenge and Arcade modes, and a Multiplayer mode that allows gamers to battle in 16-player death match online on the PlayStation(R)2 computer entertainment system. In addition, gamers will experience an improved Map Maker feature allowing them to easily create and play their own maps and share them online. TimeSplitters Future Perfect promises to be one of the deepest arcade shooters on the console with hundreds of unlockables, more realistic environments, spectacular special effects, high quality animated cut scenes, an improved physics engine, smarter enemy AI, and much more. 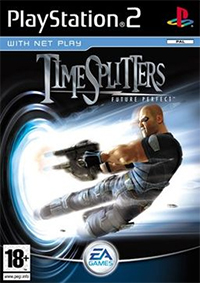