Disgaea 4: A Promise Unforgotten is a 2011 Tactical role-playing video game for the PlayStation 3 and is the fourth in the Disgaea series by Nippon Ichi Software. The game tells the story of Valvatorez (a vampire boy), Fenrich (a boy with wolf-like traits), and Fuuka (a girl with a Prinny-themed school uniform).

The game once again takes place in a Netherworld, common in Disgaea titles, and follows the story of Valvatorez, a former tyrant and vampire who gave up on his powers and atrocities after promising never to drink blood again until he manages to instill fear into a girl he met 400 years ago, Astina, who died before he could do so. Due to the decline of his powers he was reduced to being the warden and Prinny Caretaker of the prison in the Netherworld. Displeased and angered at the corruption of the Netherworld's rotten government, he rises up and seeks to overthrow it in order to take place as its Overlord.

Disgaea 4 has a political theme. Nippon Ichi, feeling finished with all the game systems a school setting can provide, made the story one of a more political nature. While aspects of Netherworld politics existed in previous games, like bribing senators in the first title, it is the central focus of the story and gameplay systems in Disgaea 4. 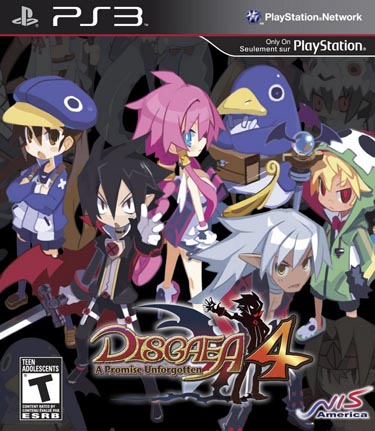