Solid Snake must infiltrate Zanzibar Land, a heavily defended territory located in Central Asia, to rescue a kidnapped scientist and destroy the revised Metal Gear D. The game significantly evolved the stealth-based game system of its predecessor "in almost every way," introduced a complex storyline dealing with themes such as the nature of warfare and nuclear proliferation, and is considered "one of the best 8 bit games ever made." 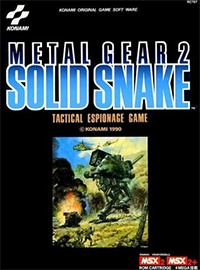