An all-new adventure for SpongeBob SquarePants, based on the animated feature film. There's trouble in Bikini Bottom -- again! Someone has stolen King Neptune's crown and it appears as though Mr. Krabs is the culprit. Despite being passed over for a promotion by Mt. Krabs, SpongeBob and his faithful but dimwitted friend Patrick volunteer to make the perilous journey to Shell City (a place no one has ever returned from) to retrieve the crown and save Mr. Krabs' life. Join our heroes on an epic and comedic quest to unexplored territory and see SpongeBob and Patrick as you've never seen them before. -Play as SpongeBob or Patrick, each with their own set of unique maneuvers, who must work together to save Mr. Krabs and all of Bikini Bottom. -Interact with all your favorite characters from the movie featuring authentic voice talent and special cameo appearances. -Earn manliness points to get the coolest power-ups ever like the cartwheel attack, electric-guided sonic wave guitar and the macho bowl. -Take the wheel of the patty wagon with spongebob and Patrick for a whole new driving experience. -6 huge, movie inspired 3D environments to explore, including bonus levels, hidden items and other secret awards. 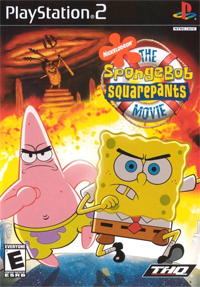