Atelier Rorona: The Alchemist of Arland

The story of Atelier Rorona takes place in the poor, isolated kingdom of Arland. A travelling alchemist visits the kingdom and shows its residents how to use the abandoned technological relics of nearby ruins. This begins a new era of prosperity within the kingdom. As a reward, the king allows the alchemist to open an alchemy workshop within the kingdom. A great many years later, the workshop is all but forgotten. One day, the workshop receives an ultimatum from the king: prove its usefulness in three years time or face closure. The current owner abandons the workshop to Rororina Frixell, her young and inexperienced apprentice. Known to her friends as Rorona, the game follows the alchemist-in-training and her companions as she tries to complete twelve challenges in order to keep her workshop open.

The eleventh game in the Atelier series, Atelier Rorona shares many elements with previous entries including item synthesis and turn-based combat. The game world map is represented by static menus in which towns, fields, and forests can be visited. Upon loading these areas, the player explores the 3D environments in a third-person view. Enemies are visible in the environment and transition to separate battle mode when engaged. The battle system emphasizes the usage of items to boost skills, induce status effects, and manipulate the environment. When not exploring Arland for quests and synthesis ingredients, the player interacts with the kingdom's residents in conversations and cutscenes similar to visual novels. There are multiple storylines and endings depending on the choices made and characters the player chooses to aid. 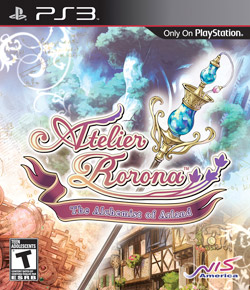