Armoured space troopers moved quickly from building to shattered building. Through the flames and billowing smoke of the devastated city small combat airships swooped, seeking out remnants of resistance. Huge metal and plasteel crawlers stalked through the remains of the city, turrets rotating, occasionally firing a burst of anti-personnel weaponry at some unseen opponent. In a few spots some small fighting still went on, but the outcome had been certain since that morning, when the defensive shields finally yielded to fleet bombardment.

Half-way around the planet, at invasion headquarters, a communications officer moved quietly towards a violet scaled humanoid watching a video screen and saluted. "Your Grace, all task forces have reported in. Jhodleth has fallen. All resistance will be suppressed by nightfall." The Admiral was quiet for a while, watching the death throes of the last holdout of the native race, and the final step in the planetary conquest. "Inform the Sauroidi Admiralty. We will leave the planet to the colonists within the week." He did not even turn his head.

Quite a while later, in a room parsecs from the conquered planet, another sauroid gazed out across the dark room. Tiny lights shone on and within a huge translucent sphere in the center of the room in a seemingly random array. The lights were several different colors, and some of them blinked furiously. As the creature watched, one of the flashing red lights went dark for a second, then came back on as a steady purple. His Supreme Omnipotence, the Emperor of the Sauroidi, turned and left the room, smiling to himself.

Andromeda Conquest allows from one to four players to vie for control of the Andromedean Galaxy. In multi-player games, which are especially recommended, alliances and diplomacy among players can become an important consideration as each player strives to conquer the most star systems. 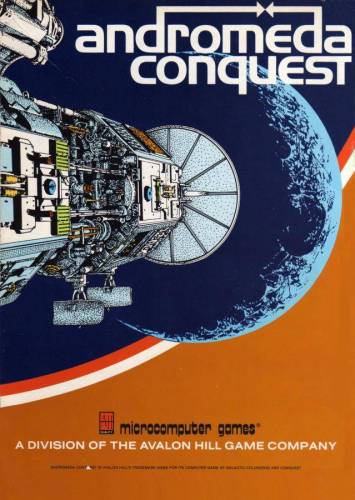