Risen is a third-person action RPG created by Piranha Bytes. Risen is considered a spiritual successor to the Gothic series, and features many resemblances to the franchise. The story takes place on Faranga, a fictitious volcanic, Mediterranean island with different sub climates and vegetation zones. The island is inhabited by humans, as well as many fantasy creatures. The player plays the role of an unnamed character who gets stranded at the island due to a shipwreck. The game is played over four chapters. 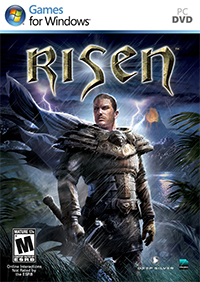