Sacred Citadel is a side scrolling action brawler video game in the Sacred series. It was released on April 17, 2013, as a prequel to the upcoming Sacred 3. It was developed by SouthEnd Interactive and published by Deep Silver for Xbox Live Arcade, PlayStation Network, and Microsoft Windows.

Sharpen your axe, string your bow, brew your potions! Ancaria needs heroes like you. Grab your friends to join the resistance! The once peaceful land of Ancaria is in grave danger. The evil Ashen empire has enslaved its population and is using the orc-like Grimmoc to wipe out the Seraphim, who swore to protect it. In order to defeat the empire you will have to prove yourself as a warrior by riding terrifying mounts, acquiring earth shattering skills and looting powerful weapons and valuable treasures. 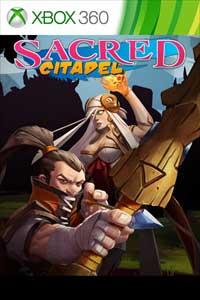