Guwange is 2D vertically scrolling shoot'em up played with a character moving on foot. The game takes place during the Muromachi period in Japan with strong fantasy elements. The shikigami demons possess the people and give them great opportunities, but they die after exactly one year. Three heroes want to get rid of the curse. They must kill the evil deity Guwange, but first they must find five elemental scrolls.

The game belongs to the "bullet hell" range of shooters, with lots of bullets on the screen where precise movement and pattern detection is required. The player can choose from three characters, each with a different attack style. They can be moved around the screen and need to shoot enemies and bosses. They have access to basic weapons and special shots, but as the characters move on foot, they cannot shoot enemies on rooftops or freely move around the level when there are structures or obstacles in the way. The player can summon shikigami, increasing firepower. 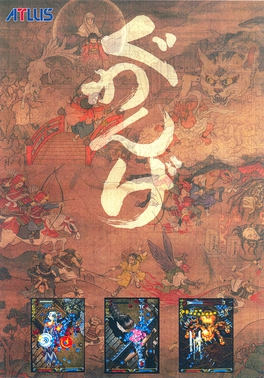