Ty the Tasmanian Tiger 3: Night of the Quinkan

After helping the Bunyup Elder by ridding the Dreamtime of the dangerous Quinkan, Ty heads for home. However, something goes wrong, and Ty winds up six months in the future! The Quinkan have invaded Southern Rivers, and even worse, the Bush Rescue team from the previous game has disbanded during Ty's absence! It's up to Ty to reunite his team members, as well as stop the Quinkan from unleashing the mysterious Quinking, an evil being of supreme power.

Night of the Quinkan is the third game in the Ty series. As Ty, players can bite at foes, or use his boomerangs for consecutive ranged attacks. Boomerangs can be customized in an assortment of ways: either by changing the chassis (each chassis has its own special abilities); or by equipping special Bunyip Stones to the boomerang's chassis. Some stones can be combined with others, allowing players to customize their attacks to their liking. Some stones are rewards for completing tasks; others, as well as boomerang chassis, can be purchased from the Rang Shop in exchange for Opals, the game's currency.

Ty 3 again rolls out the robotic mechs - choose from the Shadow or Extreme Bunyip (your standard mech), the Crabmersible (a submarine shaped like a crab, oddly enough), or the Gunyip (a speedy airplane with an assortment of bombs and guns). Ty can even take part in cart races against other characters for powerups and even more opals. 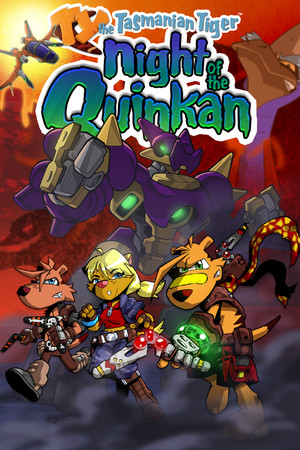