Persona 4 Arena is a 2D fighting game that continues the story of 2008's Persona 4. The protagonist, now canonically named Yu Narukami, returned to the city after the events of the last game and intends to visit his friends in Inaba during Golden Week. When he arrives however, the mysterious Midnight Channel returns and advertises a fighting tournament that will pit him and his friends against each other. The investigation team is quickly reinstated and they enter the TV world to discover why the channel has returned and what happened to their friends who have gone missing.

The story mode allows the player to pick between one of several characters and experience the story from all of their perspectives before the actual final battle is unlocked. Each fight in the game is interrupted by scenes that feature dialogue and just plain text, kind of like how one would design a visual novel. The game also includes several character from Persona 3.

The combat is based on mapping light and heavy attacks to each button. The character can however also perform light and heavy persona attacks, which summon a persona unto the field to attack. Both regular attacks and persona moves can be strung together into combos for dealing more damage to an opponent.

The game also features an auto-combo for each character, which allows players to do a basic combo that can even end in a special attack, by repeatedly tapping a single button. Besides that, the gameplay also features a few elements taken from the Persona role-playing games, such all-out attacks that knock enemies back while you charge at them, or one-more cancels, which interrupt your combo while knocking your opponent up in a way that allows you start a second one.

The game features a variety of modes, such as a lengthy tutorial that explains all the options, a "challenge" mode where you are asked to perform advanced combos and a "score attack" mode where fighting comes second to getting the most points, as well as standard features like Versus and Practice modes. 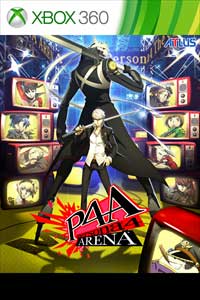