After the events of the third Metal Gear Solid game, Metal Gear Solid 3: Snake Eater, Naked Snake isolates himself from the United States and sets up home in Colombia. Here, he creates Militaires Sans Frontières (Soldiers without Borders), a private military group that provides support for countries in need. Metal Gear Solid: Peace Walker's story will explain the events which lead to Militaires Sans Frontières becoming Outer Heaven in later games and also see him finally accepting his role as Big Boss. Snake is still struggling with the guilt over the murder of a person who was very close to him.

One day, Snake is introduced to Ramón Gálvez, a peace teacher, and his student, Paz Ortega. The two want to ask for Militaires Sans Frontières hand in helping the country of Costa Rica. Recently, an unknown armed force with high-tech weapons has been creating trouble around the country and because Costa Rica's constitution forbids a military army there's nothing anybody can do about it. Snake at first refuses to help, believing that it may cause more tension in Latin America, which many believe is the centerpiece of maintaining power in the East and West. But after being presented a tape recorder by Gálvez which accidentally recorded a conversation between two women, Snake agrees, believing that one of the voices on the tape belongs to The Boss herself. Snake then sets out on a journey, a journey to not only bring peace back to the land of Costa Rica, but also bring peace upon himself.

Peace Walker is set between the events of Snake Eater and the original Metal Gear. Snake is controlled via the analog stick and the rest of the buttons vary depending on the type of button configuration you choose; shooter type, action type, or hunter type. Gameplay consists of that usually seen in the Metal Gear series, which is stealth-base movement. That doesn't mean you always have to be stealthy though, if you want you can just let go and shoot up your enemies with different weapons ranging from the M16A1 to a Stun Rod. Cutscenes are presented in an artistic comic book style similar to that of Portable Ops, with some being interactive.

Near the start of the game you will be given a central mother base to use for a number of different things. It is here where you can save your game, develop weapons, and embark on quests. At the Mission Selector screen you can replay previous missions to gain a higher score and also participate in extra ones not necessary to the main story. Cutscenes in which you have watched throughout the main campaign can be seen once again. Developing and upgrading weapons is done by spending currency known as GMP in which you obtain doing quests. At Mother Base you will be able to assign your MSF staff into different teams depending on their abilities and skills. Putting the right people in the right place will open up more opportunities to develop more items and weapons.

Multiplayer in the game is limited to ad-hoc mode and co-op. All story missions can be played with up to two people and the other co-op missions with four people. After completing certain missions and meeting certain requirements, Snake will be able to head to an island where you and some friends can engage in hunts against monsters from Capcom's Monster Hunter series. 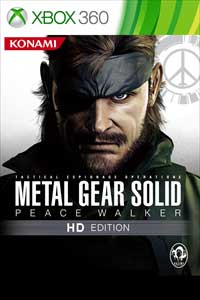