Forza Horizon is the fifth game in the racing series but is considered an arcade spin-off rather than a true simulation entry. It is done by a different development team but with the original developers involved. It introduces an open world concept to the series similar to Need for Speed: Most Wanted (2012), Burnout Paradise and FUEL. It has a day and night cycle and it is set in Colorado, USA, where the player participates in the fictitious Horizon Festival with a light story. The Horizontal Festival is a central location on the map that acts as a hub to buy new cars, sign up for new events, get paint jobs etc. After a short race to get access to the event, the player is free to leave at any time and explore the surroundings. While the realistic physics the games are known for along with the large variety of cars are retained, novelties include AI traffic with a more forgiving crash system, off-road racing on dirt tracks, and a looser atmosphere with announcers, rivals that shout one-liners, radio DJs on three stations, and an audience at the festival.

The player starts as the last of 250 competitors and has to make his way up by participating in races and gaining popularity. The competition is divided into different Horizon Event tiers represented by wristbands of different colours that need to be earned to progress. Events include point-to-point races, circuit races, rally tracks, illegal street races, skill challenges, speed trap records, races against helicopters, hot-air balloons and planes in showcase events, and the ability to directly challenge an opponent while driving around in a one-on-one sprint towards a random destination from the challenge point. Rather than pure racing, street cred has to be earned as well through continuous sponsor challenges that involve aggressive driving acts such as drifting, jumping over obstacles, near misses, trading paint, passes, burnouts, drafting, or by driving on two wheels. These can be combined into combos and they contribute to a global popularity level, provide credits and consequently open up new events. There are different ranks for each challenge to keep the player going. Vehicles can also drive through fields and use shortcuts by breaking through barriers or other obstacles. Certain events offer restrictions to have the players explore the full catalogue of available vehicles of which many are borrowed from previous Forza games. Next to expensive sports cars there are many other types of vehicles. Certain ones are hidden as barn find cars. Once discovered, they can be restored and are added to the roster. Next to the main credits currency, the player is able to progress faster by purchasing tokens through Microsoft points. Tokens allow the player to get a car without the required credits or provide a double amount of experience in the sponsor challenges for a certain amount of time. Tokens can also be spent on a treasure map to reveal the location of hidden vehicles without having to search them.

The series' paint job creator is still present along with players trading and selling liveries. There are also still different performance upgrades at the festival's mechanic Dak that can lift the slowest vehicles to the higher classes, but the vehicles cannot be customized further anymore. Upgrades can be done manually or automatically, and the game provides a warning when the player attempts to join a race with a vehicle that is not powerful enough. Also kept are the different types of driving assistance that can be toggled. The difficulty is determined through a global and opponent difficulty level, braking, steering, traction control, toggling shifting and the driving line, cosmetic damage, and the rewind function. Disabling assists provides a higher amount of credits that can be won. Rewind provides the ability to pause the game and rewind the gameplay to a certain point when a mistake has been made. Locating challenges is done through a top-down map with the ability to set a destination. For time trials the Rivals system is retained. After each race the player is challenged to beat a friend's time or another player from the global leaderboard that went just a little faster. The opponent is shown as a ghost and the system can be used to keep improving times through new ghosts.

Multiplayer includes regular races through different lobbies based on the skill level. Next to the regular races there are King games of tag in open environments such as a warehouse or a golf course, Infected where one player has to hunt down survivors to infect them and have them join the infected team, and cooperative challenges in a free-roam mode with the entire game world. A final game mode is called Cat and mouse. Players are split up into two teams with one mouse each. The mouse to first reach the finish line wins the game for the entire team, while the cats attempt to slow down and crash the mouse of the other team as much as possible. Some game elements can only be unlocked in the multiplayer portion. Multiplayer comes with a separate leveling system where new cars can be unlocked.

In the single-player there are different outposts that act as smaller hubs. Each outpost offers three PR stunts (break the speed limit, get to a photo shoot without damage, get a certain amount of skill points with a limited amount of time) that can be completed to reduce the cost to fast travel between outposts around the map by 25%, 50% and 100%. The Kinect peripheral is supported through its voice recognition capabilities to activate the GPS. While driving players can for instance use voice commands to change the waypoint to the festival, the next challenge, or the nearest one. Ghosts races can be exported, along with movies and photographs captured in-game. An additional challenge is to discover and destroy 100 discount signs spread over the map to reduce the cost for performance upgrades with 1% for each destroyed sign. 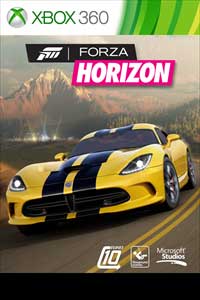 This game also exists on:
Xbox 360 Xbox One