Scarygirl (also stylized as ScaryGirl) is an adventure-platformer video game for the Xbox 360's Xbox Live Arcade, PlayStation 3's PlayStation Network and the personal computer. Prior to being adapted as a console and PC game, Scarygirl was a graphic novel by Nathan Jurevicius, a Flash game and a downloadable title for the PlayStation Portable. Developed by TikGames and published by Square Enix, Scarygirl was released on January 18, 2012 with an ESRB rating of 10+.

Scarygirl places the player in control of a girl who is sent from her home to a far-away city on a rescue mission. The girl is able to jump, grapple, and hover her way though seven game worlds, either alone or with another player in a cooperative multiplayer mode. Combat is handled through combining strings of light and heavy attacks, with grapple-based attacks becoming available once enemies take enough damage. Roundly praised for Jurevicius' art, ScaryGirl received otherwise mixed reviews upon its release. Critics found fault with both the control scheme and its combat system, although boss battles did receive some praise. 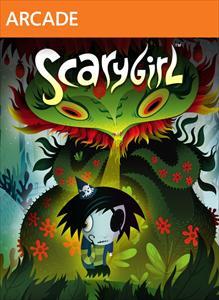