You are Sergeant Rex Colt: Mark IV Cyber Commando. The year is 2007 and Earth has been ravaged by a nuclear war which erupted in the 90's. The east vs. west conflict has raged for generations, and humanity continues to struggle to progress after a disastrous decade. New paths for peace must be found, and the US cyborg army may have found a solution: a powerful bio weapon on a distant island. Your mission is to gather information and figure out what the hell is going on.

● A Kick-Ass Cyber Shooter - There’s only one force powerful enough to stop an army of rampaging killer cyborgs, mutated scientists, metal sharks and vicious Blood Dragons that shoot lasers from their eyes – that force is you. Your name is Sergeant Rex Power Colt, a Mark IV Cyber Commando. Lock and load as you and your seven favorite fully customizable killing implements tackle a bizarre open world island crawling with evil. Take down the enemy with ninja stars, guns or even just good old explosives. Your battle. Your way. Their tough luck. ● Get the Girl, Kill the Bad Guys and Save the World - As Sergeant Rex Colt, you are part man, part machine, all American. You are a state-of-the-art Mark IV cyber-commando on a mission… of vengeance. You’re out to bring down your old commanding officer and his battalion of ruthless killer cyborgs-and you’ll stop at nothing to get the job done. ● Wrapped up with every Cliché of the VHS era - Hollywood action icon Michael Biehn (The Terminator, Aliens, and The Abyss), returns in this explosive 1980's-style sci-fi vision of a dark future where cyborgs and mutants collide. So turn off your VCR, plug in your video game cabinet, and get ready to experience all the thrills of Far Cry: 3 Blood Dragon in full stereophonic sound. 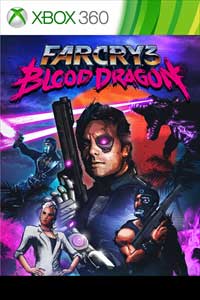 This game also exists on:
PlayStation 3 Xbox 360 PC Xbox One