Shiritsu Ryōran Jogakuin -- Ryōran Private Girl's Academy -- is a famous school which, since its founding only 30 years ago, has turned out a great many prominent figures in the artistic, literary, and political worlds. The school's founder, Genichirō Shindō, created the school to teach both the literary and military arts, and so every autumn there is a martial arts tournament for the best students from each club.

Asuka 120% Special is the first PlayStation entry in the long-running all-girl fighting game series from Fill in Cafe. Choose a character representing one of the many school clubs, such as science (Asuka), tennis (Ryoko), or karate (Torami), and fight to win the tournament. There are a total of ten characters, each with their own unique abilities and special moves.

Each character has a small meter called the Burning Gauge at the bottom of the screen that will fill up as the fight progresses. When it reaches 120% (as the game's title might suggest), the player can execute special moves for a limited time before it resets back to zero. The game features standard story and versus modes. You can play against the computer or a friend, or watch the computer fight against itself. 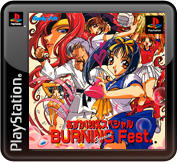