Asuka 120% Final is the third installment on the Asuka 120% all-girls fighting game to be released on PlayStation. Eleven girls from Ryōran Private Girl's Academy make up the roster and face each other in a tournament.

The game features the same game play as its predecessors, a one-on-one fighting game with a special gauge at the bottom of the screen filling up to 120%, allowing special moves when filled. In addition to the Arcade mode, it features a Training mode and a Super Rush Attack Mode. 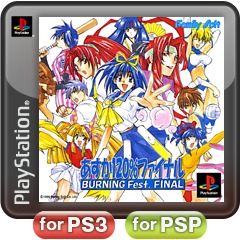