Boogie Wings is a horizontally scrolling arcade shooter. The game is set around the time of World War I, where the player maneuvers biplanes, automobiles, animals, and various other unidentifiable objects to battle an army of mech-wielding scientists. The biggest characteristic of the starting vehicle (a biplane) is the hook attached to its rear section. Enemies or objects that come in contact with the hook are dragged along by the plane, which causes damage to anything they collide with. The player can release the objects on the hook by pressing a button. 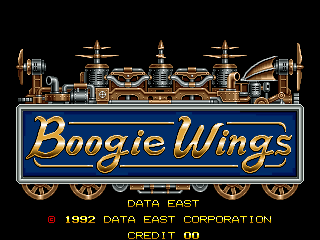