Fast-paced first-person shooter, developed by Free Radical. TimeSplitters 2's storyline takes you through time itself. Two time-travelling heroes are on the tail of some plotting aliens who just so happen to have been jumping through time, no doubt scheming after something or another. So with this in mind, the shooter locales range from a 1930s Chicago to the American Old West, the Cold War and, of course, the future. The Cold War area, not coincidentally, drops you on a Siberian station that looks almost identical to the one in GoldenEye 007 for N64, and even features similar weapons and objectives. In addition to single-player and two-player co-op, the game also features frantic four-player split-screen battles. 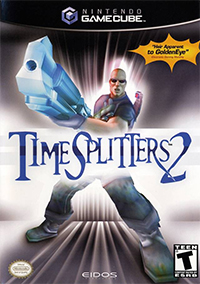