Oldorf's Revenge is an adventure game with RPG elements. Game play consists of typing verb-noun commands to explore a variety of locations. The player can choose from a total of 7 different classes, including: Cleric, Thief, Gladiator, Elf, Strongman, Magician, and Wizard. The player must change between different classes as they explore Oldorf's cavern, as different characters have different abilities. The player must explore a total of 100 individual locations, as they try to score 300 points by finding treasures within the caverns.

The player can switch between the 7 characters during game play, but each character can only be chosen 5 times. The player starts with 100 strength, and they lose 2 strength every time they switch class. The player also loses strength if they take damage from monsters or the environment during their exploration. If the player's strength reaches 0, then it is game over. 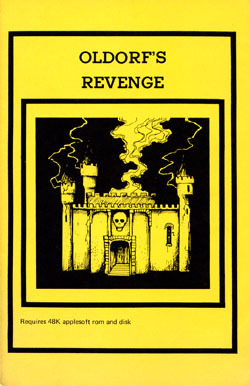