Dragon Quest IV: Chapters of the Chosen , known as Dragon Quest: The Chapters of the Chosen in Europe and originally published as Dragon Warrior IV for the North American NES version, is a console role-playing game and the fourth installment of the Dragon Quest video game series developed by Chunsoft and published by Enix (now Square Enix). It was originally released for the Famicom on February 11, 1990 in Japan. A North American version followed in October 1992, and would be the last Dragon Quest game localized and published by Enix's Enix America Corporation subsidiary prior to its closure in November 1995, as well as the last Dragon Quest game to be localized into English prior to the localization of Dragon Warrior Monsters in December 1999. The game was remade by Heartbeat for the PlayStation, which eventually was available as an Ultimate Hits title. This was followed with a second remake developed by ArtePiazza for the Nintendo DS, released in Japan on November 22, 2007. This remake was released in Australia on September 11, 2008, in Europe on September 12, 2008 and in North America on September 16, 2008.

Dragon Quest IV differs from the rest of the series by breaking up the game into five distinct chapters, each of which focuses on a different protagonist or protagonists. The first four are told from the perspective of the Hero's future companions and the fifth one, from the hero's perspective, brings all the characters together as they begin their journey to save the world. The PlayStation remake adds a sixth chapter, which is retained in the DS remake. 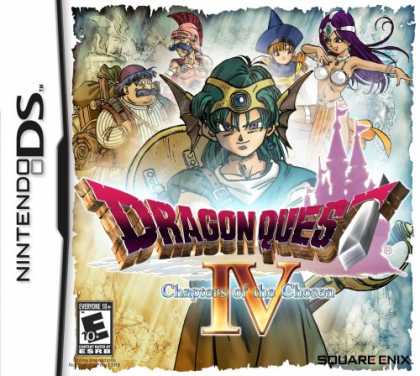