The game is a remake/adaptation of the NES classic Excitebike that features updated graphics and Mario characters such as Mario, Luigi, Princess Peach, and Yoshi. There were four versions in all, each one adding a new character and other features.

The gameplay is almost identical to the one in the original Excitebike. It's the same kind of obstacles and the overheating is present. The only difference apart from the graphics is the new "SUPER" mode. There are coins spread out on the course, and by grabbing five of them, the player enters the super mode. This means that the player can boost unlimited without overheating. The super mode lasts until the player crashes, but it's still possible to grab five more Coins and enter the super mode again. 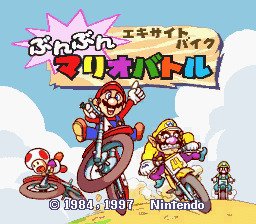