The students of Will O'Wisp magical academy have a little problem: Their teacher has mysteriously disappeared. After commandeering a handful of rockets to rescue her, they've wound up on a strange (and sometimes scary) adventure through outer space. Now players must rescue both their classmates AND their teacher - and just maybe the whole solar system while they're at it.

Explore strange planets. Players see the sights of this strange, sci-fi fantasy setting as they uncover the secret behind their teacher's disappearance in this epic role-playing game. The stylus controls everything, from combat to conversations to outfitting allies. Simple controls make it easy to play but a challenge to master. Players can link up wirelessly with five friends and explore the amigo dungeon together - they'll find unending challenges and incredible rewards as they delve into the depths of this unique multiplayer experience.

Madeleine, a respected and powerful teacher at Will O'Wisp magical academy, tells her students that she will undertake a dangerous mission in space and trains them for combat should the need arise. After not hearing from her for some time, the kids stumble upon a hangar of rocket ships. One by one, they board individual ships and crash land on distant planets alone. Players hop from planet to planet assembling the group of classmates. Once together, they learn of an evil sorcerer - a former student of the academy who now has ambitions to destroy reality - and set out to stop him.

The game's combat plays like a traditional role-playing game. The difference comes from the command wheel and the stylus interface. Players tap on the attacks they want to use and then tap on an enemy to target. The game focuses on magic attacks: Each character has a "sign" linked to one of the planets that determines the type of magic he or she uses. As the planets move through the solar system, the effectiveness of magic spells shifts, requiring an ever-changing battle plan: Monsters and characters grow stronger as their planets shift into prominence and weaker as they move out of those positions. Players can check the planets' positions by tapping on the astrolog. 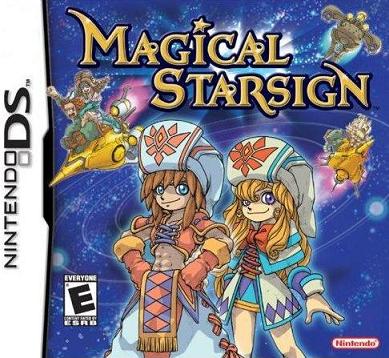