Tales of the World: Radiant Mythology 3

The story is set in the world of Luminasia, where large countries dominate smaller ones for the sake of harvesting Hostia, a form of crystallized mana produced by the World Tree. The story follows the player and the guild Ad Libitum as they investigate a red smoke, capable of altering the forms of living creatures, which people have mistaken for the wish-granting manifestation of the Descender. Slowly, they learned that Hostia was not provided for humans to mine, but rather, to seal one of Luminasia's seed worlds, Jildea. Join Canono on her quest to explore the whole world. With sketchbook in hand, the girl seeks to draw all the scenes in Luminesia. Make the flying ship Baneltea your base and enter the guild Adoribitom.

Clear missions, win items and team up with the swordsmen, magicians and whatnot in the Tales franchise. There are 50 new characters and 30 of them are player characters, including Asbel, the hero in Tales of Graces.

The game adopts the popular free run battle system which gives you complete freedom to strike out, or dodge in the battle field. 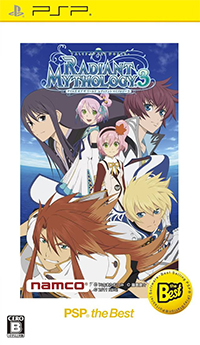