The Warriors is a beat 'em up video game published by Rockstar Games. It was released on October 17, 2005 for PlayStation 2 and Xbox, and February 12, 2007 for PlayStation Portable. The Warriors is based on the 1979 movie of the same name (which in turn, is based on the 1965 novel of the same name), and features large scale brawling in 3D environments interspersed with other activities such as chase sequences. The console versions of the game were developed at Rockstar Toronto, while the PSP port was developed by Rockstar Leeds. The game was released on the PlayStation 3 on May 28, 2013 in the U.S. and May 29, 2013 in Europe via the PlayStation Network.

The game takes place in a gritty 1970s New York City. The story follows a street gang, the Warriors had been accused of a murder they didn't commit, and must return to their home turf in one night, although the game begins three months prior to the film events.

The game was influenced by Rockstar Games introducing a substantial beat 'em up element to the gameplay. The actors from the film itself reprised their roles to perform the voices of their original characters. Upon its release, The Warriors received positive critical response. 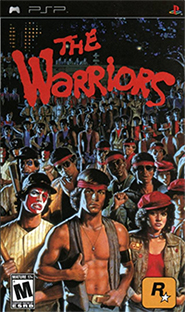