Grand Theft Auto is back. The cars are faster. The streets are busier. The bad guys are nastier. The police are angrier. And now, the FBI and the Army are getting involved... Seven ruthless gangs are involved in a ruthless power struggle and it is up to you to make a name for yourself.

As a small time hood, your only goal is to get to the top of the crime world. The simplest way to do that is to join a crime syndicate. Luckily, the various gangs tend to be at war with each other, and blowing away a few members of one gang will increase your credibility with another. Eventually, you will be able to answer pages and take missions from one of the gangs, where completing missions will move you up the ranks. Should you fail, it's Game Over in GRAND THEFT AUTO 2. 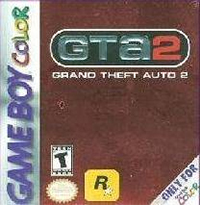