Star Gladiator explodes in true 3-D on the PlayStation game console with characters and moves that you must experience to believe! Protect Earth from the imminent attack of a mad doctor and his plasma terrorists as they draw energy from the plasma power the fighting power of the mind. The federation puts its trust in the genetically-altered aliens known as Project Star Gladiator. In stunning highly-detailed off-world locales crush the evil and brilliant doctor and his minions into space junk before they pound Planet Earth. The warriors of Star Gladiator will rule the third dimension! 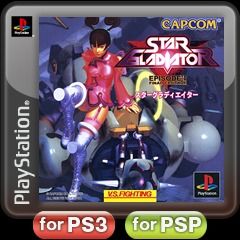