Rampage World Tour is a 1997 arcade game. It is the second entry in the Rampage series.

Up to three simultaneous players control the monsters George (a King Kong-like gorilla), Lizzie (a Godzilla-like dinosaur/lizard), or Ralph (a giant werewolf), created from humans who were mutated by experiments conducted at Scumlabs. They need to destroy all buildings in a high-rise city to advance to the next city. On their way they can destroy helicopters, tanks, taxis, police cars, boats, and trolleys, as well as eat people.

The monsters can jump and climb buildings, and attack enemies and buildings with punches. Some buildings also take damage when jumped on.

The player receives damage from enemy bullets, grenades, shells, etc., and from falls. Damage can be recovered by eating the right food, such as fruit, roast chicken, or soldiers. If a monster takes too much damage, it reverts into a naked human and starts walking off the screen sideways covering themselves with their hands. If the player continues, the human will mutate back into the monster with a full life bar. 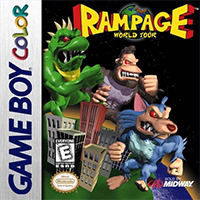