Based on events that occurred 150 years prior to BlazBlue.

The protagonist, Touya Kagari, is a resident of Shin Yokozaki City and a sophomore at the prestigious Hakuou North Academy. An earnest and responsible young man, Touya appears to be no more than your average high school student. While returning from his part-time job, he heard a mysterious sound coming from the depths of the Restricted Ward, an area off-limits to unauthorized personnel due to a horrible disaster that happened there ten years ago… His curiosity having gotten the best of him, Touya ventured ever deeper into the ruins of the ward, eventually coming across a man who appeared to be gravely injured. Concerned, Touya rushed to his side, asking if he was okay and if he needed any help. But as Touya approached, the man suddenly stood up and attacked, screaming, “You’re an enemy!” And in the midst of invisible ringing bells, psychotic strangers, exploding walls of flame, and almost certain death, a small, cute girl with an enormous sword came charging in… And despite her frilly, fragile appearance, her battle prowess was beyond reason or doubt. The name of Touya’s savior was Es, a soldier belonging to the Mitsurugi Agency. Seithr, Drives, Unions, and secretive organizations… Yanked from the comfort of his everyday life, Touya was forced head-long into a world where the threat of death was everywhere and even allies could be his downfall… The wheel of fate has begun to turn… And the story of the Azure, and that of Touya Kagari and the mysterious girl Es, began. 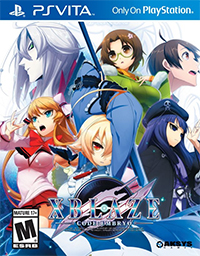