The year 842 is the beginning of the end.

In an act of unprovoked aggression, the Militesi Empire invaded the Dominion of Rubrum. Imperial dreadnoughts swarmed the skies, assailing the unsuspecting countryside under the banner of the White Tiger. From amidst the flames of the besieged dominion, the Vermilion Bird rose in defiance, her crystal granting magic and mighty eidolons that her disciples might cast out the technologically advanced aggressors. Thrust into the tumult of war, the fate of the world and its four crystals now rests on the shoulders of fourteen brave, young warriors.

Since the dawn of eternity, four lights of hope have shone upon the world. Men flock to these lights, around which they build four peristylia. Each peristylium becomes their faith and society, the path upon which they are set.

The Vermilion Bird – wings of fire to lift the heart. The White Tiger – steely arms by which to seize knowledge. The Azure Dragon – unclouded eyes that see all beneath the sky. The Black Tortoise – a rigid shield and a well-guarded blade.

But when nine and nine meets nine, Tempus Finis shall be willed upon them. For without the Agito, their world—called Orience– must persist in its spiral. In the land of Orience, it is said that “when Tempus Finis arrives, the crystal will guide Agito, those who will balance the world.” Many interpret this as “saviors, called Agito, will emerge when the catastrophe, referred to as Finis, befalls this world.”

Step into the fray as Class Zero, a group of students from an elite military academy whose country is attacked by an aggressive neighbouring Empire. In the brutal and harrowing struggle that follows, defeat the Empire and uncover the secrets behind the war using a range of powerful magical and combat abilities and an exciting new battle system. 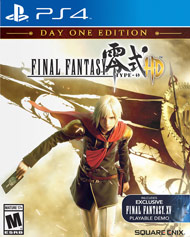