The class divide is growing ever wider; the wealthy add to their riches and the poor are near destitute. Compounded by the fact that the government is utterly corrupt, the lower classes are on the verge of revolution, and it's up to you to prevent total anarchy in Vandal Hearts.

In this RPG or Strategy hybrid, you take on powerful monsters and villainous bosses with your band of renegade warriors, mages, and clerics. Engage in turn-based strategic battles paying heed to the strengths and weaknesses of the seven different character classes. As your characters advance in levels, chose a path in which they can excel. Take into account the terrain of your battlefield and use natural features such as mountains, boulders and valleys to your benefit. Now you can wade into glorious battle with Vandal Hearts.

The combat takes place in a series of 3D grid based maps and each character in the party has a certain amount of movements they can perform each turn. As the game progresses, other characters join and leave the party and as they increase in level they can progress along different paths of development. Between each battle there is a cut scene that develops the plot using the same 3D engine as the combat. In between battles you have the opportunity to talk to people in cities as well as purchase different equipment for the up coming battles. 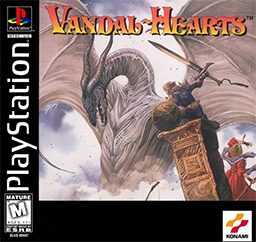