The Emperor's New Groove is a video game based upon the 2000 film of the same name, developed by Argonaut Games for the PlayStation and Microsoft Windows, and by Sandbox Studios for the Game Boy Color.

The game loosely follows the plot of the film, from which it also includes a number of video clips. Emperor Kuzco has been transformed into a llama by his evil advisor Yzma, who has subsequently taken over his throne. Kuzco befriends the peasant Pacha, and together they seek to confront Yzma and obtain an elixir that will return Kuzco to his human form.

he Emperor's New Groove is a platformer in which the player controls Kuzco from a third-person perspective, progressing through a linear succession of levels based on locations from the film. The primary goal of the game is to get to the end of each level without losing all health.

Throughout the levels are placed a number of coins. Collecting all coins in a level rewards the player with a large gold coin and is necessary for 100% completion. To achieve this, the player is usually required to defeat enemies and uncover secrets within each level.

Some levels involve Kuzco drinking magic elixirs, turning him into a frog, a turtle, or a rabbit, each with specific abilities needed to complete the level. 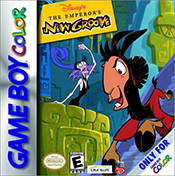