Computer Conflict is a collection of two wargames released as a single package: Rebel Force and Red Attack!.

Rebel Force is a company level simulation that pits a player controlled modern combined arms force against a computer controlled well equipped rebel force. The player and computer take turns moving units on a hexagonal board. There are a total of 5 different scenarios available. Victory is achieved when one side gains 100 points. The player gains points by occupying the rebel city, with a stronger occupying unit accruing more points per turn. Rebel forces will continuously gain units as battle progresses, and they gain points for every turn occupying the left hand side of the screen, destroying a player controlled unit, or keeping the enemy city free of occupying forces.

Red Attack! is a two player combat simulation that pits an attacking mixed Soviet tank and infantry force against a defending infantry force. The attacking player wins the game by occupying 2 of the 3 enemy towns at the end of 5 turns. The defending player wins the scenario by preventing this occurrence. Unit placement is randomized at the beginning of each game, and each player can reject the map up to three times before they are forced to accept the scenario. 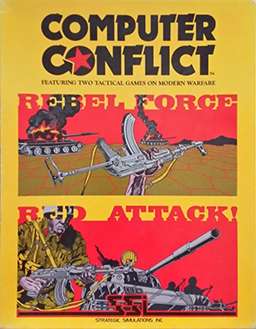