In this game the player assumes the role of a space pilot named Darrian. One day, he receives a report from a nebula space station, from which he learns that nearby human colonies have been attacked by mysterious aliens known as Xenites. Darrian wastes no time, and sets off to protect the humans and stop the aliens.

Xenon is an overhead shooter, in which the player controls a vehicle that is able to transform into a tank or a plane. The transformation can be usually performed by player at any time, to combat particular enemies; however, during some sequences the player is forced to use a specific type of vehicle. During the tank gameplay, the player controls the movement of the playfield (up or down) by simply moving the tank in the direction of choice.

The game features a 3D playfield (some enemies, for example, will be mounted on hills of sort, where the tank can't shoot them). To combat these, the player needs to transform its tank into a plane. The game then switches to the more familiar gameplay style as seen in other vertically scrolling shooters. The plane has to transform back into a tank again to combat most ground units. Upgrades can be taken from destroyed enemies. 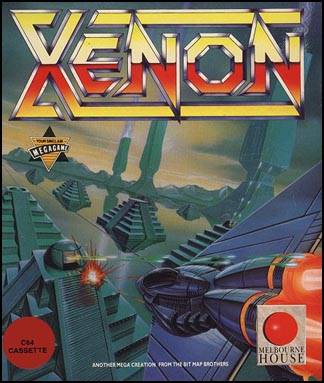