It's the 21st century in America. Technology has improved by leaps and bounds, and now (most) people live in peace. But in a small town somewhere, a vicious terrorist group known as Zapper is terrorizing small towns and kidnapping innocent people so that they can build a secret weapon. And, as it turns out, the family and friends of someone code-named "Super Joe" just so happened to be one of the innocents caught! Now Super Joe's hungry for revenge. Can Super Joe and his armored car destroy the Zapper organization and save his town from utter destruction in time?

The Speed Rumbler is a action game where the player races against the clock in an armored car piloted by Super Joe, destroying other cars and saving captives along the way. Super Joe's car is armed with a gun that he can use to shoot down enemy cars, but the enemy cars have a few tricks up their sleeve, so Super Joe should always be on guard. As the player progresses through the game's six stages, Super Joe can be given a boost by saving captives, who then award him with bonus points, increased fire power, or speed-ups. If Super Joe's car is destroyed, he can continue the fight on foot with his rifle. But unfortunately, Super Joe is not as powerful as his car - one hit and he's history.

Super Joe has 24 "hours" to destroy Zapper. The game is over when Super Joe runs out of lives or time - or if he successfully completes his mission. 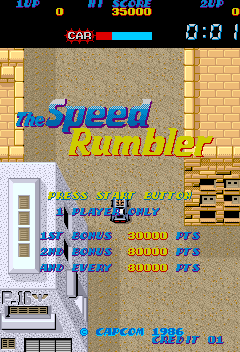