The dragon rises to power once again in Panzer Dragoon: Orta. Dragons, creatures that once ruled the skies, are now mankind's only hope against a dark empire. Years ago, a legacy was born that ruled the skies. As time passed and memory grew dim, distant times progressed from History into Legend. Now, the era of human prosperity has come to a grinding halt, with all but a few pockets of civilization destroyed by years of devastating battles. The population clings precariously to the brink of extinction, scattered across the desolate land, living in the darkest age in history. A new Empire rules with an iron grip, and a band of rebels begins a revolt in an attempt to become masters of their destiny once again. As the world is engulfed in the flames of war, an unlikely and unwilling Hero must become mankind's only hope.

Soon, the Dragon will rise again....

The fourth installment of the Panzer Dragoon series has you playing Orta, a young girl who has been imprisoned by the Empire. Under a wave of attack, the prison camp is broken through by a mysterious dragon, and Orta takes it upon herself to ride the dragon, and destroy the Empire once and for all. Along the way, she will also discover her own destiny, and the mystery surrounding her new friend. With humanity at war and on the brink of extinction, it's up to you and your dragon to take to the skies and assist in the rebellion. On the back of your flying friend, you'll become part of intense chases and battles with powerful enemies. In order to defeat the evil empire, you must master multiple weapons, dragon powers, and advanced attacks.

Simply put, you have limited control of the dragon for most of the game, as your trigger finger will be shooting non-stop at the enemies that fly around the area. Orta will be your main source of fire-power when you simply press the fire button, but by pressing and holding, the aim cursor will change, allowing you to fire a burst of power from the dragon at whatever the cursor aims at.

The dragon itself can change into three forms at a press of a button. Each form has a different style of attack and power ability.

A port of the original Panzer Dragoon is included. 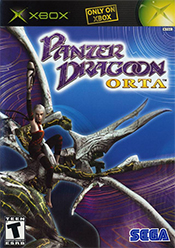