Shin Megami Tensei: Digital Devil Saga 2 retains the "Press Turn" battle system from the previous installment. The mantra grid was altered and enhanced into a hex grid - when one skill is unlocked, the surrounding skills can be unlocked as well. More enemy types are included, as well as a "Karma Ring" system in which Karma Rings can be equipped to add stat boosts to characters. These can be customized using gems. In the new Berserk Mode, the characters enter a half-human, half-demon state, giving them high critical rates, but also increased vulnerability. 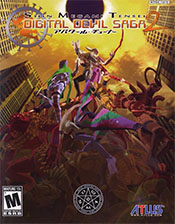