Notable features of the game include the ability to shapeshift between demon and human forms in battle, and a return of the "press turn" battle system from Shin Megami Tensei III: Nocturne. A large difference between Nocturne and Digital Devil Saga is the ability to change equipped skills at will, instead of at level up. Unlike in Nocturne, unlearned skills are not lost forever, which allows for much greater character customization. The game features a "Mantra" system where Macca gained after battle can be used to download new Mantras at a saving terminal. Atma, gained by devouring enemies in battle, then allows the characters to Master these mantras, imparting new abilities.

Digital Devil Saga is set in the Junkyard, a vast, post-apocalyptic wasteland in which it is constantly raining. All residents of the Junkyard adhere to elements of Hinduism, and seem to be reincarnated when they die, aware of their past lives. Six main tribes, the Embryon, Vanguards, Maribel, Solids, Brutes, and Wolves, fight to destroy each other and earn passage into Nirvana.

Digital Devil Saga was created in part to make the Megami Tensei series accessible to a broader audience "while staying true to its roots." The game had a high production value due to its well-known voice actors and detailed cutscenes, while extra care was taken to sync dialogue to mouth movement. The battle mechanics were also made more forgiving than in Shin Megami Tensei: Nocturne. 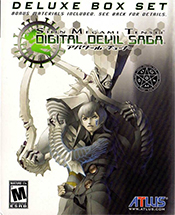