Surviving Once More: In Danganronpa 2: Goodbye Despair, Japan’s famous murder mystery visual novel game shares its adventures once more as it hits stores. It is the prequel to the splendidly received Danganronpa Trigger Happy Havoc that featured a dark story and lots of gameplay innovations to the visual novel genre. Put your skills to test, your best instincts to use and your courage into practice as you try to solve mind blogging murder cases and put an end to the brutal insanity forced upon every student in the invisible walls of Danganropa’s Jabberwock Island.

A Deadly Illusion: Set in the island paradise of Jabberwock, play as Hajime Hinata, one of Hope's Peak Academy's “Super High School Level” students and help him solve the murders to identify the killers in order to survive the tortuous island. The game features two main styles of gameplay: The Daily Life and Deadly Life Section in which players can converse with other characters in the game, acquire items and search for evidence when a crime has been discovered. The second part is the exciting Class Trial Section in which players try to identify the culprit; it features same game aspect with its predecessor but with new gameplay innovation offerings.

Various Modes: Enjoy various modes outside the main game including having a virtual pet that grows as the game progresses, Magical Girl Miracle Monomi, a minigame in which players need to survive against waves of cute monsters, Island Mode, an alternate mode where students don’t need to go thru the “killings storyline” but rather befriend others and earn hope points and Danganronpa IF, an alternate story for Danganronpa Trigger Havoc Happy that is unlocked after a game is cleared once. 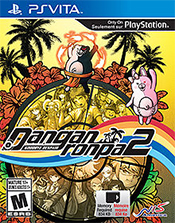