Emily’s everyday life is shattered when a strange woman knocks at her door, begging for her help as a frightening meteor descends from the sky. In an instant, she’s whisked away to the mysterious House of the Lancasters, where she discovers she has a special gift: the inner light. Now Emily’s power is the only thing that can stop the dark disease that threatens to swallow the entire world. This deadly infection corrupts anything it touches: humans, animals, even plants and inanimate objects, turning them into violent monsters. Work together with your new family to fight back and restore the world, before it’s too late! 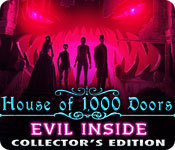