Challenge your friends to fight through TowerFall’s Dark World, with or against you, in this massive expansion for the acclaimed archery brawler.

Enigmatic portals open to four new battlegrounds across TowerFall's twisted alternate reality. Fight aboard legendary ghost ship The Amaranth, across the murky bogs of Dreadwood, or through the crumbling halls of Darkfang. Enter Cataclysm, an all-consuming vortex where levels shift into unique layouts with every match. Murder your friends with new game-changing arrow types and variants.

Team up to challenge the all-new Dark World Mode - a co-op campaign for 1-4 players. Battle your way to hideous boss monsters, and face the brutal challenge of the added Legendary difficulty mode. Expand your roster of playable fighters with the undead pirate Vainglorious Ghoul and 9 more alternate archers.

Dark World also adds a powerful level creation tool, allowing players to create and share their own new Versus towers. Of course, Steam Workshop is fully supported for the editor.

The Dark World Expansion pushes TowerFall further in every direction, a great excuse to revisit the beloved indie fighter. 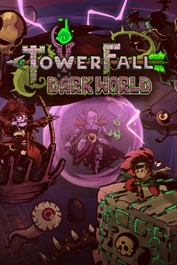