Nintendo Characters Fighting Each Other Choose the best Nintendo character and win over the opponents. Most of the characters from previous installments returned and ready to attack each other. Classic characters such Mario and Donkey Kong and new heroes such as the Animal Crossing Villager, Wii Fit Trainer and Mega Man are mixed in this game. This 3DS version will feature stages based on released handheld system games. Let the battle begin…!

Same with other games on this series, this game will have up to four players fighting against each other. Pressure opponents with a variety of simple yet complex attacks and win the battle by smashing them out of the arenas. SSB enthusiasts will be delighted as some elements of previous games come back. Players can send their fighter as customized from different version; customized attack directions are also featured in this game. Levels of battles will be in between Super Smash Bros. Melee and Super Smash Bros. Brawl. Touch screen controls are removed for this edition. 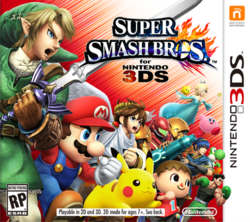