The Great Underground Empire is in its heyday. Upscale condos crowd the massive caverns. Subterranean highways stretch from Aragain to the Fublio Valley. And no adventurer has yet set foot in the open field west of the white house. But now both town and countryside are being abandoned, their inhabitants fleeing in the wake of a dread wizard's curse. The curse has already disposed of the royal Flathead family. It threatens to destroy the entire kingdom - unless you can stop it. Your quest will take you to every corner of the empire, as you seek out objects ranging from the absurd to the sublime. The quixotic jester will test you with games, riddles, and tricks. And the immense Flathead palace and its environs offer a multitude of surprises.

Zork Zero combines the best of the legendary Zorkian universe with the latest technology in interactive storytelling. It has all the richness and depth you expect from Infocom interactive fiction, including such intriguing packaging elements as a wizard's secret spell, an unusual blueprint, and a "Lives of the Twelve Flatheads" calendar. Communicating with the story is easier than ever, with all the features you've been asking for:

Author Steve Meretzky, whose award-winning stories include Planetfall, The Hitchhiker's Guide to the Galaxy, and Leather Goddesses of Phobos, lends his characteristic whimsy to the tale. 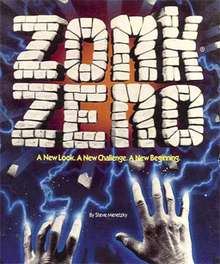